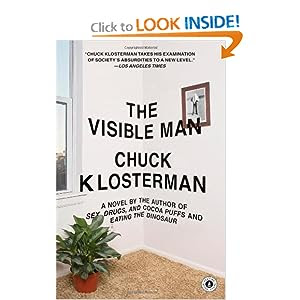 It was more than one hundred years ago that H. G. Wells penned the science fiction classic, The Invisible Man, which subsequently paved new paths in the horror genre. The idea of a mad scientist who makes himself invisible and becomes mentally deranged as a result, is one that has taken root in popular culture ever since.

In his genre-bending new novel, Chuck Klosterman borrows the essential elements from Wells’ classic with some modifications. For one thing, he fixes the science. There has been some discussion that a truly invisible man would have been blind whereas Wells’ lead character, Griffin, clearly was not. So Klosterman’s protagonist, referred to simply as Y_, is not invisible — he is the visible man. But Y_ , much like Griffin, has an ability to make himself invisible to others.

Posted by Booksnfreshair at 9:37 AM