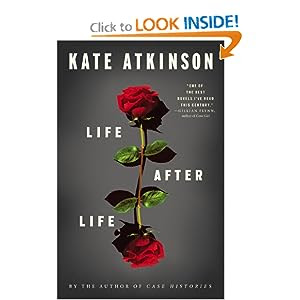 According to the basic tenets of Hinduism, life is a continuous spectrum into which you are born as different embodiments. The opposite of death, therefore, is not life, it’s birth. The path one follows along one such reincarnation might follow a predetermined pattern, but what shape would that path take if you threw in random tweaks here and there. What happens if you don’t die of an umbilical cord strangling you blue, if instead of getting swept away by the ocean waves, a kind stranger rescues you when you’re a little girl playing with your sister. These are the very questions that the immensely talented Kate Atkinson addresses in her latest book, Life After Life.

Ursula Todd, the central character in the novel, is born on a cold, snowy night in 1910. In her first reincarnation she barely lives a few minutes having been born with the cord wrapped around her neck. In subsequent births, however, she gets further along until in the last variation she lives to be a old lady who has lived through and seen the worst of the World Wars, especially World War II. As a child, she is taken to a doctor because her trying mother, Sylvie, assumes there is something just slightly off about her younger daughter. Ursula seems to see things that have happened before in a pattern of deja vu. She knows she is different somehow but can’t seem to grasp what it is about her that makes her so.

Ursula lives through a time in history where women didn’t really have a large range of options. A potential career would be a school teacher or a secretary in some government office. Marriage and motherhood, if they happened, were expected to provide succour, but they often didn’t. To accept these social confines, Ursula follows Nietzsche’s basic principle, “Amor fati.” “ It means acceptance. Whatever happens to you, embrace it, the good and the bad equally,” she says.

So it is that she embraces life with complicated family dynamics, an abusive marriage and even war. The Greek poet, Pindar is quoted here: Become such as you are, having learned what that is. In the case of Ursula, that learning is a minor miracle to behold. When she finally becomes all that she is, you realize that it’s as much about the journey as the final outcomes. Kate Atkinson’s dazzling new novel shows us how life in all its glory can still turn on a dime. Its beauty lies in the transitory and completely arbitrary nature of everything that passes us by. “Time isn’t circular, it’s like a palimpsest,” writes Atkinson. As Life After Life shows, we choose to inscribe it with the details of our lives, most of them bland and ordinary, but interspersed with some utterly breathtaking moments that take our breath away.
Posted by Booksnfreshair at 11:05 AM No comments: