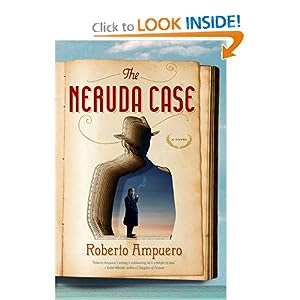 Does poetry alone provide enough sustenance to feed the soul? Of what value is a life spent creating beautiful art without a true companion to share it with or someone to pass it on to? Fundamental existential questions may concern most of us at some time or other, but these questions haunt the great Chilean poet Pablo Neruda's last days. Set in the waning era of the Allende socialist experiment, The Neruda Case has the Nobel Laureate's ghost looming large on every page.

The rest of the review is here.
Posted by Booksnfreshair at 6:34 AM No comments:

Review: The Thing About Thugs by Tabish Khair 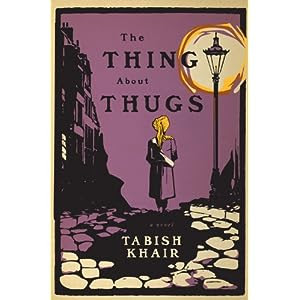 Sometimes, you can take the man out of the cult but you can’t take the cult out of the man. Such is the fate that meets poor Amir Ali in Victorian-era England. Having been brought up in the shadows of the ancient Indian “thuggee” cult, Amir Ali decides he has to escape his fate and moves to the Indian city of Patna from a small town in Bihar state, Phansa. Once in Patna, Amir’s path intersects that of a British dabbler in the sciences, Captain Meadows. With Meadows, Amir Ali travels to England at a time when phrenological science is all the rage.

Feeding the growing popularity of phrenology, the study of skulls, is a whole set of scientists, some with views more extreme than the others. It is only a matter of time before mere grave-robbing to get at prized “specimens” is not enough--now these phrenologists must hire killers to get at the more unusual “things” as the skulls are called. So begins a series of gruesome and macabre murders in London piloted by one particular phrenologist, Lord Batterstone.

In an ironic twist, the extreme wing of the phrenologists use their science to “prove” that entire races such as Africans and Asians are predisposed to violence. The “thuggee” cult born in India, where the religious cult members were also assassins, serves to underscore this point. The finger of suspicion eventually points at Amir Ali. He meets all the qualifiers -- he is Oriental, has thuggee blood in him, and a weirdly shaped skull to boot. He is bound to be the murderer. He is not. A whole host of colorful characters who are Amir’s friends, eventually help clear his name.

Tabish Khair, the book’s author, teaches in Denmark and has said that the inspiration for the book came from a book about thugs he found in his grandfather’s library. Indeed the book is told through a number of voices and one such is a teen boy going through his grandmother’s old library in Phansa village in Bihar. The book, which was shortlisted for the Man Booker Prize, works best when it describes both the “thuggee” cult (even is this part reads a little textbookish in style) and the London of Victorian times. Khair does a fantastic job populating the book with a whole host of colorful characters. He also builds the creepy atmosphere of the city lit by gaslights and eternally covered by fog: “Night descends on London once again. Descends? No, It rises slowly, in the overlooked nooks and crannies of this teeming metropolis. First, it crawls like a spider between the cobblestones. Then it spills like ink on the ground, between the buildings, from the walls, under the bridges. It grows out of the corners.”

Where The Thing About Thugs doesn’t quite work is in making the case for how justice was finally meted out. The resolution to the murders depends on one coincidence which seems like quite a stretch. Khair also tries hard to shed light on the rampant racism targeted at Orientals and the “other” and his efforts largely work even if they get a bit repetitive towards the end of the book.

While The Thing About Thugs doesn’t coalesce into a strong novel, it is a good trip to Victorian England and a “science” not many of us know about. It might be worth reading for these reasons alone.
Posted by Booksnfreshair at 12:04 PM No comments:

Review: The Sly Company of People Who Care by Rahul Bhattacharya 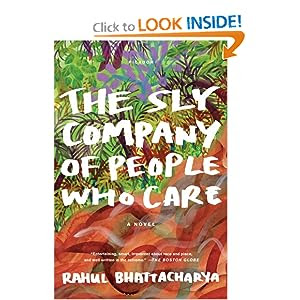 First, a quick background about Indian (specifically Bengali) cinema: The great Indian filmmaker, Satyajit Ray, was from the state of West Bengal and is one of Bengal’s most revered sons and cultural icons. It stands to reason that years after Ray’s death, the incredibly talented Rahul Bhattacharya (a fellow Bengali) would use Ray’s famous bildungsroman, Pather Panchali, as the inspiration for his debut novel.

At its most basic essence, Bhattacharya’s The Sly Company of People Who Care is also a bildungsroman—it traces the growth and coming of age of its protagonist in a country far away from home, Guyana. The protagonist in the novel seems to be modeled after Bhattacharya himself. Like Bhattacharya, the protagonist is a cricket reporter who decides to take an extended yearlong vacation in Guyana. Gooroo, as the protagonist is referred to by others, has “a one year visa—to reinvent one’s living, to escape the deadness of the life one was accustomed to…to be hungry for the world one saw.”

The rest of this review is here.
Posted by Booksnfreshair at 11:59 AM No comments: 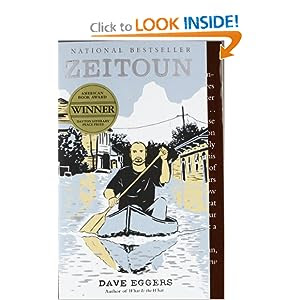 It’s been four years since one of the country’s deadliest natural disasters, Hurricane Katrina, hit New Orleans, yet the stories of those affected have been making their way out only slowly. Dave Eggers’ Zeitoun is one such. Here too, as in his brilliant What is the What, Eggers does an expert job narrating non-fiction and making the story come alive.

By all indications, the Zeitouns—Kathy and Abdulrahman—were a successful couple in New Orleans. They owned a construction and painting business and had a vibrant family with four girls. Abdulrahman, a Syrian American who had spent a lifetime wandering the seas, settled in New Orleans in 1994 and married Kathy, a convert to Islam.

The rest of the review is here.
Posted by Booksnfreshair at 12:28 PM No comments: 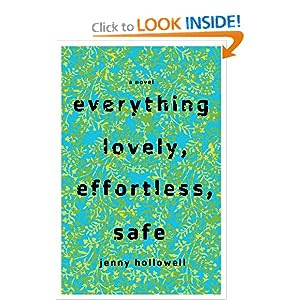 For the longest time, growing up in rural Virginia, Birdie Baker is convinced she is destined to follow the path set forth by her devout Christian parents. Like them, as a Jehovah’s Witness, she will spread the word of the Lord, marry, settle down and wrap it up. But the sense of unease that plagues her even after she is married to a church-going man named Judah, is worsened when she runs into her high school drama teacher at the grocery store. “What are you still doing here?” he asks, “I figured the next time I saw you it would be in a movie.” Eventually, leave Virgina she does. Birdie pools all her savings toward a one-way bus ticket to Los Angeles.

The rest of this review is here.
Posted by Booksnfreshair at 12:24 PM No comments: 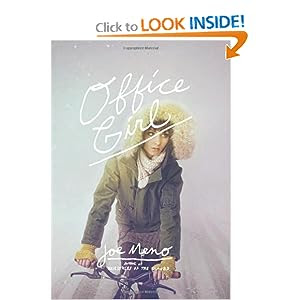 Young adult angst. Talk of the world coming to an end. Office Girl, the fantastic new novel by author Joe Meno, reminds us that indeed we have been there and done that. Yet some stories never grow old.

Set in 1999 as Y2K looms large and President Clinton’s impeachment trials play out in the background, Office Girl takes place in a wintry Chicago. Odile is the office girl in the title, just coming out of a romance with a married man. She is trying to make sense of her life having dropped out of art school and flitting from one boring office job to the other. Eventually she lands a night sales job at a Muzak company selling office music to doctors’ offices. Here she runs into Jack Blevins, a 25-year-old who is just beginning the divorce process after his wife, Elise, leaves him and moves to Germany. Office Girl is essentially a love story—it is about Jack’s and Odile’s wary yet loving moves back into some kind of tentative relationship.

The rest of the review is here.
Posted by Booksnfreshair at 1:27 PM No comments: