Review: Daughters of the Revolution by Carolyn Cooke 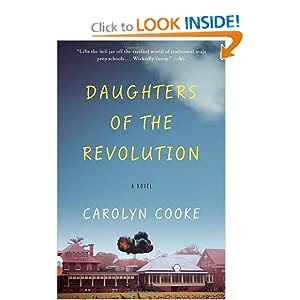 Carolyn Cooke is a master of the short story form—she won the O. Henry Award for her collection, The Bostons. Cooke’s debut novel, Daughters of the Revolution, is also set in New England in the late 60’s, in a town called Cape Wilde.

The epicenter of much of the action, even if it might not seem so at first, is the Goode School—a prep school for boys. Principal Goddard Byrd, known simply as “God,” is absolutely against allowing co-education in his school. “Over my dead body” is his constant refrain when asked about it.

The rest of the review is here.
Posted by Booksnfreshair at 9:36 AM