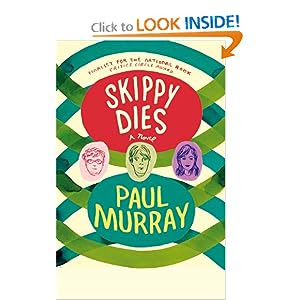 The Ireland that is the setting for Paul Murray’s delightful novel Skippy Dies, is not the one crippled by debt and threatening to bring down the Euro. Instead, the novel is set in the not-so-distant past when the roaring Celtic Tiger was a prominent player on the world economic stage. Skippy Dies is set in an Ireland where the “past is considered dead weight—at best something to reel in tourists, at worst an embarrassment, an albatross, a raving, incontinent old relative that refuses to die.”

The rest of the review is here.
Posted by Booksnfreshair at 9:19 AM