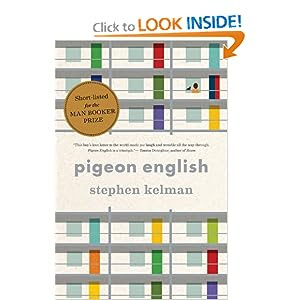 Around ten years ago, a young Nigerian immigrant, 10-year-old Damilola Taylor, was beaten by boys barely older than him in Peckham, a district in South London. Damilola later bled to death. The incident sparked outrage in the United Kingdom and was subsequently pointed to as proof that the country’s youth had gone terribly astray.

The same incident seems to have also inspired a debut novel, Pigeon English, with 11-year-old Harri Opoku filling in for the voice of Damilola Taylor. As the book opens, Harri has recently emigrated from Ghana to London with his older sister and his mother. Dad and younger sister and the rest of the family are still in the native country and Harri is often brought back to his home country through extended phone calls exchanged between the two sides.

The rest of the review is here.
Posted by Booksnfreshair at 7:41 AM