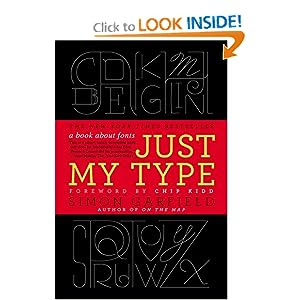 If you think that fonts are not a big deal - that Calibri is just the same as Arial - consider this: it was 2009 when something went awry at the popular Swedish furniture company, IKEA. Sure the company still sold furniture and home accessories with interesting names such as Björken and Säter; the sleek cafeterias still dispensed the sinfully delicious Swedish meatballs with lingonberry sauce. What had gone horribly wrong in the eyes of many, however, was that IKEA had lost its soul. The 2010 store catalog used Verdana as its typeface dumping IKEA's old faithful, Futura. The font switcheroo sparked uproar in the design industry, and the company was seen as abandoning its particular brand of design chic in favor of something more drab and well, homogeneous.

In his entertaining and informative book, Just My Type: A Book About Fonts, Simon Garfield makes the case for typeface variety so eloquently that you begin to see the point of the IKEA font debacle.

The rest of the review is here.
Posted by Booksnfreshair at 8:32 AM