REVIEW: Shadow Without a Name by Igancio Padilla 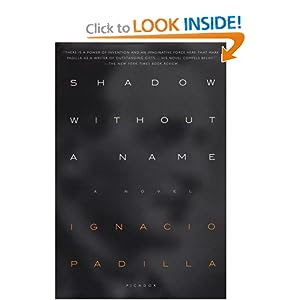 "My father used to say his name was Viktor Kretzschmar. He was a pointsman on the Munich-Salzburg line and not the type to decide, on the spur of the moment, to commit a crime."

So begins the brilliant Shadow Without a Name, a book that doubtless deserves the award for best opening lines in a novel in recent memory. The narrator here is Franz Kretzschmar, a young recruit in the Third Reich, haunted by questions of identity--both of his own and his father's. As he recounts, on an old dilapidated train long ago, Viktor Kretzschmar met Thadeus Dreyer. Both expert chess players, a deal was struck: "if my father won, the other man would take his place on the eastern front and hand over his job as pointsman in hut nine on the Munich-Salzburg line. If, on the other hand, my father lost, he would shoot himself before the train reached its destination." As a result of that wager, a Viktor Kretzschmar spends the rest of his days as a frustrated pointsman and Lieutenant Colonel Thadeus Dreyer is decorated with the Iron Cross for his actions on the front.


Posted by Booksnfreshair at 8:22 AM