Review: Is Everyone Hanging Out Without Me? By Mindy Kaling 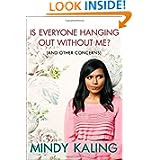 Mindy Kaling’s publisher’s research analytics are correct: I am indeed one of the “Aunts of America” who was totally intent on buying her book for my niece—and my daughters. But now that I have read Kaling’s absolutely delightful volume, I am loath to part with it. I’ll just have to get each one of the girls a copy of this wonderful book.
The children of South Asian immigrant professionals, Kaling writes about her childhood years with honesty and wit. Kaling’s descriptions of her high school clique and her subsequent falling out of it, are especially hilarious. Kaling consoles readers that being quiet and patient in high school has its own rewards—there’s no point in peaking early, she points out.
She can’t understand high-schoolers who use the Mellencamp song, “Jack and Diane,” as their anthem. “I guess I find “Jack and Diane” a little disgusting,” Kaling writes, “As a child of immigrant professionals, I can’t help but notice the wasteful frivolity of it all. Why are these kids not home doing their homework? Why aren’t they setting the table for dinner or helping out around the house?”
“The chorus of “Jack and Diane” is: Oh yeah, life goes on, long after the thrill of living is gone. Are you kidding me? The thrill of living was high school? Come on, Mr. Cougar Mellencamp. Get a life.” Touché.
After high school, professional success takes its time reaching the Dartmouth grad. Her struggles to get the career she wants are outlined beautifully and all through, Kaling never loses her sense of humor and her ability to make the best out of even the most discouraging situation. At a babysitting gig in New York City, she is thrilled to be consuming the kids’ food. “Kid-friendly food is the best, because kid-friendly simply means ‘total garbage.’ I ate frozen chicken nuggets shaped like animals, fruit chews shaped like fruit, and fruit shaped like cubes in syrup,” Kaling writes. “I discovered that kids hate for any food to resemble the form that it originally was in nature. They are on to something because that processed garbage was insanely delicious.”
Eventually Kaling gets the break she wants: She is part of a two-person show off Broadway (that she co-writes) and that show’s success opens doors for her in Hollywood. Kaling writes about these accounts well and about the role, which she is best known for—as staff writer for the television sitcom, The Office.
Kaling’s work ethic, largely influenced by her parents, shines through in the work she produces of course, (even if she says she gets distracted often) but she also makes an explicit point of it in her memoir: “In my entire life, I never once heard either of my parents say they were stressed. That was just not a phrase I grew up being allowed to say. That, and the concept of ‘Me time.’”
Her personality comes through loud and clear in many cases but you particularly root for her when during a photography session, she is presented only a few dresses all in size 0. There is only one boring navy shift in her size 8. Kaling insists on having a styling professional change a size 0 dress to make it work for her.
There are two things, which I hoped Kaling had addressed in the book and she does not: how she landed her agent Marc Provissiero and her thoughts on the limited number of women writers in comedy. “I just felt that by commenting on that in any real way, it would be tacit approval of it as a legitimate debate, which it isn’t,” Kaling writes. Her stance is understandable, but still it’s hard not to look at it as a soapbox opportunity, lost.
When I mentioned that I was looking forward to reading Kaling’s memoir to a friend, she said she was hesitant to read it because she was not too crazy about Kelly Kapoor on The Office. This, as the memoir outlines, is one of Kaling’s worries. “Obviously this confusion is not something I would mind if I were playing Lara Croft or a Supreme Court justice or Serena Williams or something, but when you’re playing a bit of a selfish, boy-crazy narcissist, it’s a concern,” she writes. Kaling goes on to list just how many ways she is different from her on-screen character.
By the end of the book, you come to realize that Kaling is most definitely not Kapoor. Kaling is a class act and a worthy role model for my niece and each of my two daughters. There is no further proof of this than this one sentence in which Kaling outlines the things that break her heart: “Valet Guys Who are my Dad’s Age: I can’t even deal with this. When I see a man who is around my father’s age running down the street to get a car, it breaks my heart,” Kaling writes. That one sentence captures Kaling’s essence: warm, loving, and above all, someone with a deep sense of empathy. It also helps that she is very, very funny.
Posted by Booksnfreshair at 12:39 PM