All That Is Solid Melts Into Air by Darragh McKeon 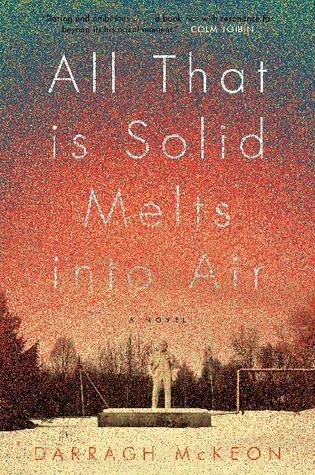 The fallout from Chernobyl was devastating and searing of course but Darragh McKeon’s piercing debut shows us that lingering clouds of disaffection loomed large over all of Russia affecting its citizens in complex ways. Yevgeni, a struggling piano student coming of age in Moscow’s ghettos; his principled aunt Maria; and her ex-husband, Grigory, a doctor summoned to the “battlefront” -- this is a small subset of characters whose lives are irrevocably changed by the accident. But the moving novel shows that the disaster only made clear the writing that was already on the wall: Twilight was descending on the empire.
Posted by Booksnfreshair at 11:01 AM

Email ThisBlogThis!Share to TwitterShare to FacebookShare to Pinterest
Labels: All That is Solid Melts Into Air; Darragh McKeon; Chernobyl; Russia