Review: All That Is by James Salter 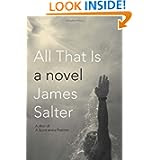 The cinematic first chapter of James Salter's new book All That Is is set during World War II, during the Battle of Okinawa, when American forces were slowly "prying" many an island from the Japanese. The chapter serves as a perfect frame of reference for the three men who make up most of its narrative: there's dashing Kimmel who always boasts about his sexual exploits, pious Brownell, who's constantly embarrassed by details about Kimmel's escapades; and finally, Philip Bowman, a run-of-the-mill obedient deckhand who is diligent and does as he's told. While this first chapter is very unlike the rest of the novel, it serves to give us a sneak peek at the characters' personalities and discover how they change (or not) during the course of their lives. Soon the war ends, the camera zooms in and the rest of the book focuses mostly on Bowman as he returns home to the rest of his life.

Read the rest of the review at BookBrowse.com.
Posted by Booksnfreshair at 9:43 AM

Email ThisBlogThis!Share to TwitterShare to FacebookShare to Pinterest
Labels: All That Is, James Salter, Literary Fiction