REVIEW: The Odds by Stewart O'Nan 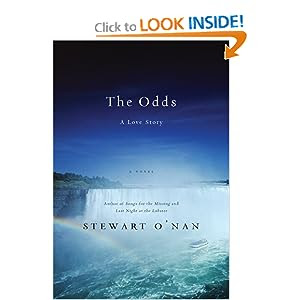 Many years ago, during happier times, the newly married Art and Marion Fowler had honeymooned in Niagara Falls. At the time, the grandeur of the falls and its associated magic seemed like just the right launching pad for a successful marriage. Now, around 25 years later, the couple is back. This time they’re hoping to revive their failing marriage by banking on the seedier side of American commerce that the falls also represent. Plagued by financial woes and the ghost of marital infidelity, Art and Marion decide to spend one last weekend together at the falls. He vainly hopes to resuscitate the relationship trying to exorcise it of the ghost of his past infidelity, while Marion just hopes “to endure it with some grace and get back home so she could start dealing with the paperwork required to become for the first time in her life, a single-filing taxpayer.”
Equally (if not more) urgent are their financial problems. Both Art and Marion are without work—Art having been laid off more recently. Whatever little nest egg they had was wiped out with the market swings of the great recession. “The crash was too fast, or he was too slow. Like his mother, he prided himself on being a buy-and-hold investor, and expected a rebound, if only the vaunted dead-cat bounce. Their portfolio was conservative and diversified, but by the time he made up his mind to pull their money out, the Dow was below 8,000 and everything had slid.” Credit cards almost all maxed out, Art proposes they bet it all—literally—in one weekend at the area casinos. Art has studied how the casinos operate and is convinced his technique will allow them to win at least some amount of money to tide them over and pay the bills for a while until the horizon looks clearer.
Stewart O’ Nan is a prolific writer and over the years he has developed a special ability to tell stories with a focus not so much on a dramatic narrative arc as on the minutiae of the human interactions that punctuate our everyday lives. His Last Night at the Lobster tracked down the last day unfolding at a closing Red Lobster restaurant and beautifully afforded the reader peeks into the manager’s trying life and his interactions with the restaurant staff. In that book, O’ Nan proved that one needn’t write a doorstopper or a saga spanning large periods of time to craft beautiful stories. A snapshot frozen in time will work just as well. He uses a similar technique in this slim new novel. The Odds follows the 52-year old Art and Marion over the course of a single weekend. And it is their smallest interactions, now worn to a routine over time, that make up for the bulk of the book and give the story its ballast.
Art has reserved the honeymoon suite in a nice hotel and bought Marion a special ring—yet the generosity seems lost on her. Marion, for her part, is trying her best to be nice and gracious to her husband, but has already written the marriage off as a lost cause. Over the course of the weekend, as vacation gives them the perspective they need, Art and Marion come to realize that they need each other’s routines and company more than either of them had imagined. “The real answer, the real reason the question tortured him, was that without Marion he wouldn’t know what to do or even who he was,” O’ Nan writes about Art, “He could send his laundry out, but he would belong to that legion of aging, unloved men buying frozen dinners and six-packs at the grocery store, or worse, working there, bagging their sad purchases and wishing them a good evening.” If nothing else, sheer force of habit in companionship is hard to break. It remains to be seen whether this force alone is strong enough to have them stay together.
O’ Nan uses the backdrop of the Niagara Falls—its cheap and tawdry commercialization, yet its irresistible place in the American psyche, to good effect in the book. Just like the casinos surrounding the natural wonder that ring hollow despite their attractive facades, Art and Marion too wonder if marriage has lived up to all its promised riches. “What had she done with her life?” Marion reflects, “For a moment she couldn’t think of anything. Become a wife and a mother. A lover, briefly, badly. Made a home, worked, saved, traveled. All with him.” Yet both Art and Marion accept that the life that exudes the falls, “even if it was all just a show,” is better than going home to “dark, empty apartments”
There is a reason that the couple’s favorite song is the 70’s ballad, Crazy on You. The song’s opening refrain “We may still have time, we might still get by,” just might apply.
Thanks to Netgalley for providing an electronic galley of this book. The full review will also be published on curledup.com.
Posted by Booksnfreshair at 11:52 AM